So a Korpsmann, a Trapper and a Trunk walk into a bar.... 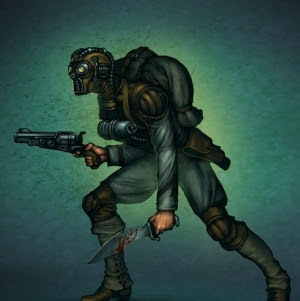 Welcome back (or hello anew) to my Schill simmerings...

So last article I jotted down some of my thoughts on old mate Schill and how he opts to shake his money maker in the city of 'faux. I must say I got some fantastic opinions and tactics over on AWP that have certainly made me think deeper about

Any way, the steam trunk is the logical next choice given it is his totem. Aside from this guy being a pain in the arse to build, he seems to be decently solid 3SS utility piece. I feel that 2SS would have been too cheap, but 3 is maybe a little too much, also I don’t this it would of broken the game to give him the Freikorps attribute.

That and it is a peon with no other (1) actions aside from really walk or defensive (don’t do it, that’s another card chewed!!).

Any way onto his abilities. Obviously the giving out his pretty good, but situational, (0) actions tie in really well with Von Schills ‘Engage at will’ , factor in if you use on of its heals, on a 1 wound model that is near Schill, you’re back up at 2AP to kill again which is great! So the heal flip and dumping poison is great, but is costing a card (sensing a them here) same as the remove burning action. The Disaggregator Solution is great against summoners or people who use scarp or corpse markers…and it…doesn’t cost a card, so that is a shock!!

I feel the steam trunk again pushes you into the Schill-bubble mentality as it starts to lose a little bit of effectiveness when you aren’t also benefitting from Schills HtK and dual (0) actions auras. Great bit of kit if running the bubble, although, probably a little bit expensive IMHO.

The blurb for these guys goes on about how they work together and it's all for the better of the Korps and that apparently only the best are recruited into the Korp... With a shoot of 5...yeah...I beg to differ.

The lineman or grunt for Schills Korp… In all honesty, while this guy is a relatively solid minion, he just sits somewhere in this weird limbo of being too much of a ‘generalist’. Like he does OK at attacking, does OK at running schemes and if he is near shill he does OK at staying alive. But the problem is, and I think an issue with most ‘generalist’ units within Malifaux, with Soulstones having very little granularity it can make dudes cost too much (or too little).

Best example of what the Korpsmann is up against. If you want him for scheme running, he is up looking at the Void Wretch, which is only 80% of his cost, you are looking at 1 less wound (but Incorporeal, which trumps Unimpeded also), same speed, can get some mileage out of Hannah’s bury upgrade, and to finish it off, gets more survivable as you chew through you’re control hand (works well with Schill ey…). So for scheme running, I feel the wretch has it in speed and probably survivability.

As to something more murder orientated. For 20% more than the Korpsmann you get his box-buddy the Trapper. I see people take the Trapper as a mercenary, even with the tax, he still represents well. As a natural outcast and only the 1 Stone more than the Korpsmann. You lose unimpeded, but get ‘From the Shadows’, which come on, is an amazing ability (apparently worth 2SS on Schill for a less impressive version..so go figure..) and an extra wound. Although you can’t scheme turn 1, it still allows you to happily do it in an amazing position turn 2 onwards. Factor in his gun is everything the Korpsmann has and better. Sure his melee is atrocious, but it’s almost like he has a get out of jail free…card… (pun pun pun) at the cost of one.

The Korpsmann’s refer to field guild is pretty good, but it again requires the discarding of a card, which is already so prolific in a Schill themed crew, that you’re probably not using it a whole heap (unless you really need Duck and Weave…).

So with the Korpsmann I feel like he suffers for his generalist nature as there are 2 models that do either of the 2 jobs much better for a similar cost.

Unless you need cheap bodies, or want to stick with the box, I’d probably not bother IMHO.

Expert hunters and trappers are these fellows, with "an almost supernatural aptitude for
understanding terrain and how to best exploit it,". That shoot 5 rears it's ugly head again... although I'd hate to see the poor scrubs that Schill doesn't allow into the Korps.

I’ll just finish off the non-enforcers of this box. I think I spruked the trapper pretty well up above, but honestly, for the cost, he is phenomenal and probably lucky they are Rare 2 and are a pain to get a hold of (just convert stuff Malifaux community, it isn’t that scary :P).

I’d never take a Schill crew (and probably a lot of outcast crews in general) without one. His hitting power is enough to knock a minion off turn 1 with a focus, decent Rams (for the crit) and an 11 (for the damage) and usually he is in an excellent position to do that.

Although only a shoot of 5, a natural (+) is glorious and his damage track is a decent spread also. The inbuilt reposition trigger is fantastic if that Crit isn’t going to get the kill, being able to shimmy out of LoS from reprisal is fantastic.

Most of the time he probably isn’t going to be in the Schill-bubble and would prefer to just shoot all game, maybe drop a marker etc. He is still a very potent piece and people will put a good few AP into bringing him down to stop the constant whallops from his rifle.

So that’s just my thoughts on those fellas so far with my limited games under the belt. Feel free to chime on in and give your thoughts!

I’ll look into the boxed enforcers next time J.